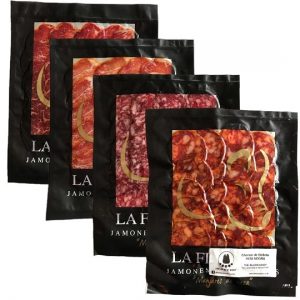 A beautiful collection of the best cured meats the world has to offer. This hamper contains:

Lomito, translates to ‘tenderloin’ in Spanish and it is the most succulent part of the Iberian pig- it should not be confused with the Lomo which is a tougher bit of meat from below the animals’ ribs. This prime cut can be located between the shoulder blades where the animal is most muscular and lean- to eat it is unbelievably soft and delicate. There is only a very small amount of fat that marbles this meat. The Lomito has a smaller fat content than any other Pata Negra meat. Unlike, the most well known Spanish cured meat, Chorizo, the Lomito is not chopped and mixed with other ingredients but only lightly seasoned with paprika and marinated in salt, pepper, lemon, garlic, oregano and a little olive oil so that the true beauty of the meat can be appreciated.

The Lomo, like the Lomito, is a cured cut from the Iberian black pig’s tenderloin. The Lomo is from just under the pig’s ribs. It is a beautifully delicate and flavoursome meat that is practically untouched in its preparation so that the full succulent flavour of the pork can shine through. This Lomo has been sourced from the Acorn Fed Black Iberian Pig, the same animal as the ‘Pata Negra Jamon’. It is the finest of all breeds when producing cured meats and this can be identified by the marbling of fat which isn’t present in lesser quality Lomo. Unlike, the most well know Spanish cured meat, Chorizo, the Lomo is not chopped and mixed with other ingredients but only lightly seasoned with paprika and sometimes marinated in salt, pepper, lemon, garlic, oregano and a little olive oil so that the true beauty of the meat can be appreciated.

A Salchichon (Very similar to Chorizo) is made from ground or finely sliced pork and cured with salt and garlic. The difference between a Salchichon and a Chorizo is the spices. A Chorizo is made with paprika which gives the sausage its deep red colour. The Salchichon has a slightly pink colour and is spotted with black pepper. This Salchichon is not just any cured meat- this is Salchichon Iberico de Bellota and has been produced using the finest of Iberian pork. The taste is incredible and intense- This product is perfect on its own, with a slice of bread and cheese or as an ingredient in your cooking. It is an unforgettable addition to any Spanish dish.

Chorizo is by far the most popular and famous cured Spanish meat in the world. It is one of Spain’s most appreciated export and is loved all around the world. Chorizo is made from ground or finely sliced pork and cured with salt and lots of spicy paprika. Although you may be able to get Chorizo very easily, it will be hard to come by a Chorizo as good as this one. This is Chorizo de Bellota which has been produced from 100% pure bred acorn fed Black Iberian pigs which are considered the finest in the world. This Chorizo is certainly not your average cured Spanish Sausage. Go on- try for yourself. You will taste the difference right away! 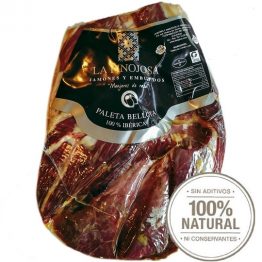 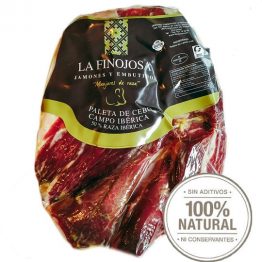 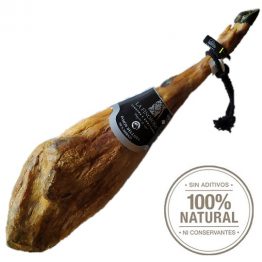 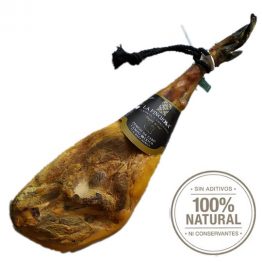 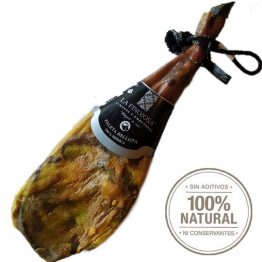 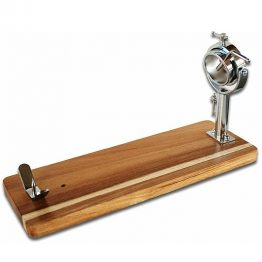 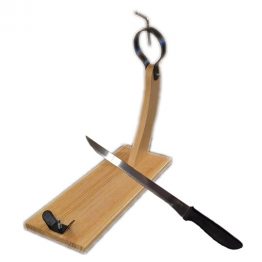 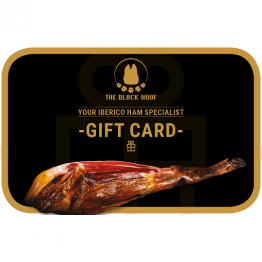 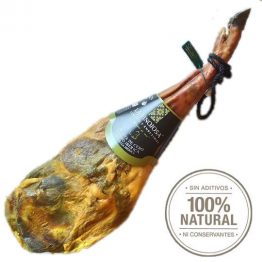 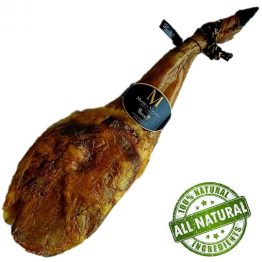 Rated 5.00 out of 5
£189.00
At The Black Hoof we use Cookies to remember your preferences and your visits and thus provide you with a more tasty experience! By clicking "Accept", you give us your controlled consent.
AcceptLearn More
Manage consent